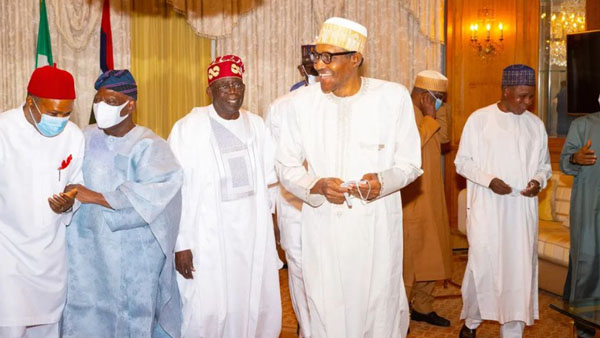 In a bid to save the All Progressives Congress from collapse at the national convention, which holds on Saturday, the President, Major General Muhammadu Buhari (retd.), on Thursday, held a series of meetings with governors, party leaders and APC members in the National Assembly.

The PUNCH learnt that some governors and chairmanship aspirants of the APC were still against the imposition of Senator Abdullahi Adamu by the President as of Thursday night.

As of press time, some of the APC chieftains at the Presidential Villa were a former interim Chairman of the party, Bisi Akande; national leader, Bola Tinubu; Minister of Science and Technology, Dr Ogbomnaya Onu; Senator Rochas Okorocha, Senator Ibrahim Shekarau and Senator Aliyu Wamako.

Others are governors Nasir El-Rufai of Kaduna State; and Aminu Masari of Katsina State; the Minister of Transportation, Rotimi Amaechi; Chairman, Caretaker and Extraordinary Convention Planning Committee of the party, Mai Mala Buni; and Secretary to the Government of the Federation, Boss Mustapha. The President is expected to meet all the 23 APC governors jointly today (Friday).

It was gathered that chairmanship aspirants held long meetings in Abuja over the President’s demand and were expected to issue a joint statement.

One of the aspirants said, “We met with the President on Wednesday night and he made it clear that he wanted all those vying for offices to emerge through consensus. In essence, he wants the entire convention to be a mere formality for affirmation. He wants Senator Adamu as the next chairman.

“The President also promised to return the money spent to procure the N20m form. So, we are currently holding meetings and we will issue a joint statement.

“Sincerely, none of us is happy about this. If they knew this was what they were going to do from the start, they should have said so. At least we wouldn’t have wasted money on adverts, mobilisation, logistics and transporting supporters to Abuja from our states. This is disappointing for a party that calls itself progressive.”

A deputy national chairmanship aspirant, Sunny Moniedafe, said he would not be stepping down, adding that everything would be settled on the field of contest.

Moniedafe said, “I have spent over N300m over the last 20 months. I visited Gombe, Bauchi, Adamawa and Borno states several times. It is not just about buying form. How can the APC stand before the world and canvass votes from Christians when all top positions for the North are being given to Muslims? Muslim chairman, Muslim deputy national chairman (North), Muslim organising secretary and I hear the vice-chairman, North-East zone, will go to a Muslim too.

“I’m not playing religious politics, but Nigeria is a diverse country. Let us take all these into consideration. I don’t agree with what they are doing and I hope they have a rethink. I am an Urhobo man but from the North.”

Confirming Buhari’s position on Adamu, Governor Abubakar Bello of Niger State, who is a member of the APC caretaker committee, said in an interview with Arise Television on Thursday that the President had asked the 23 APC governors to ensure that Adamu emerges the chairman at Saturday’s convention.

“At the moment, we are looking at Senator Abdullahi Adamu based on the suggestion by the President for whatever reasons. But I believe that this is a democratic system. If the other contestants do not key in or buy this idea, it is their legitimate right to contest, but we hope that this matter will be resolved within hours or the next few days,” Bello stated.

Also speaking on Channels Television’s Politics Today programme, Plateau State Governor, Simon Lalong, said the President remained the leader of the party and had the right to insist on his preferred candidate.

Lalong added that it was not a case of imposition but consensus.

When reminded of the fact that those who choose to step down must indicate by writing, Lalong said there was ample time to get all the aspirants to do so.

However, Governor Kayode Fayemi of Ekiti State, who is also the Chairman of the Nigerian Governors’ Forum, said he was not aware of Buhari’s endorsement of any candidate.

Fayemi, while speaking at an event organised by the Centre for Democracy and Development, on Thursday, said Buhari had the right to anoint a candidate, but added that there was no guarantee that his candidate would win.

Responding to a question, he said, “As to your question on whether the President has anointed anyone, I have no knowledge of that, but the President is well within his rights to have a preferred candidate. But in our party, let him come and campaign for that candidate at the Eagle’s Square on Saturday.

However, a source in the Presidency said Buhari had adopted the micro-zoning formula presented by the governors and it would therefore be wrong to say the President was imposing people on the party.

The source said allegations that the President was imposing aspirants was nothing but blackmail.

He stated, “The issue of Mr President trying to impose persons against the wishes of party leaders, especially governors, does not arise. It is pure blackmail by those who have lost out.

“The man has been transparent enough to tell stakeholders his desire for the party to have its chairman and the governors themselves wanted to know if he had a preferred choice, which he told them at the meeting on Wednesday.”

The Presidency official further stated that Buhari also had his preferred aspirants for the national secretary and national deputy chairman of the APC, but decided to respect the micro-zoning the governors had endorsed.

The rebuttal comes amid claims by Governor Rotimi Akeredolu of Ondo State that some forces outside the South-West were trying to impose aspirants on the party.

The Presidency official stated, “Even where he preferred certain persons, he could not force them on the people if the positions they are seeking are not zoned to their states.

“For instance, he wanted his long time ally and friend, Ahmed Farouk, as the deputy national chairman (North). But Farouk could not make it because he is from the North-West, while the position was zoned to North-East. That is why you can see Muhammed Kyari as the new person.

“In the same vein, he would have loved Ife Oyedele as national secretary, but the slot does not belong to Ondo; it goes to the Oyo/Osun axis according to the briefing he got from the governors. So, do you now expect the President to force people on others? It is not possible.”

Meanwhile, Buhari met with federal lawmakers, who are members of the APC, at the Presidential Villa on Thursday.

While addressing the legislators, the President urged party leaders and stakeholders to stick to the zoning arrangement released three weeks ago by the caretaker/extraordinary convention planning committee.

This is as he urged them to avoid distractions and to channel their energies into improving the fortunes of the party in the forthcoming elections.

The President reminded members of the proximity of the election dates set by the Independent Electoral Commission, advising that positions should be harmonised with a bigger picture of winning elections and providing good governance.

The Special Adviser to the President on Media and Publicity, Garba Shehu, disclosed this in a statement titled, ‘Avoid distractions, keep your eyes on the ball, President Buhari tells APC leaders, members’.

Buhari told the lawmakers that a zoning template was produced and adopted by the party after wide consultation in order to ensure that the leadership was reflective of the diversity in unity, while representing various dynamic interests.

He stated, “It is imperative that we adhere to that template. The time available to us is limited and I, therefore, enjoin you to collaborate with the various stakeholders within and outside your respective states and zones to agree to work together and harmoniously in electing into the allotted positions appropriately as stipulated in the provided template.

“This will not only produce a smooth process and limit friction, but will enhance the image of the party positively and strengthen our overall position of dominance in the political space.”

Buhari also emphasised that as the national convention draws closer, members could not afford to do anything that would jeopardise the chances of the party in the 2023 general elections.

He added, “A critical segment of our national democratic process is the National Assembly. Being representatives of our people from all over the country, the National Assembly, especially the 9th Assembly, has exhibited a commitment to a peaceful democratic process in its conduct and utmost maturity in its relationship with other arms of government. I commend the leadership for this success.

“Distinguished senators and honourable members, we have an obligation to conduct the upcoming convention in a manner that not only fortifies the unity of our party, but also improves the prospects of our electoral fortunes in the 2023 general elections. You have an important role to play in ensuring that this happens.”

But the Speaker of the House of Representatives, Femi Gbajabiamila, lamented the neglect of the National Assembly.

A top source at the meeting told The PUNCH that Gbajabiamila wondered why the National Assembly was only being consulted two days to the convention when everything had been concluded.

“Gbajabiamila lamented the relegation of the National Assembly in party affairs. The governors have already drawn up unity lists; the President has also picked his own candidate. So, he said it was wrong to put the National Assembly last when all had been finalised,” a lawmaker who attended the meeting said.

In a related development, it was learnt that the President met with APC stalwart and presidential hopeful, Tinubu; and a former Chairman of the party, Akande, as part of efforts to ensure that the convention goes smoothly.

Akande was said to have kicked against the plan of the governors to impose his estranged ex-deputy governor, Senator Iyiola Omisore, on the party.

“Buhari is trying to get the support of all the key stakeholders in the APC. The matter is that most people do not want Senator Adamu. Now, he is seeking the help of Tinubu and others. But Bisi Akande is against Omisore. He will present his demands to Buhari,” a party chieftain said.

Also on Thursday, the party barred political appointees from voting at its convention holding on Saturday.

The APC made this known in a statement titled, ‘Attention to political office holders who were elected as delegates’.

It read, “The National Caretaker Extraordinary Convention Planning Committee of the APC has declared that all political appointees, who were elected as delegates to the national convention slated for 26/3/2022, shall not vote in view of the controversy surrounding Section 84 (12) of the Electoral Act, 2022.APC convention: Buhari battles last-minute crisis, summons govs, chairmanship aspirants’ fail to agree

“However, political appointees can still attend as observers.”