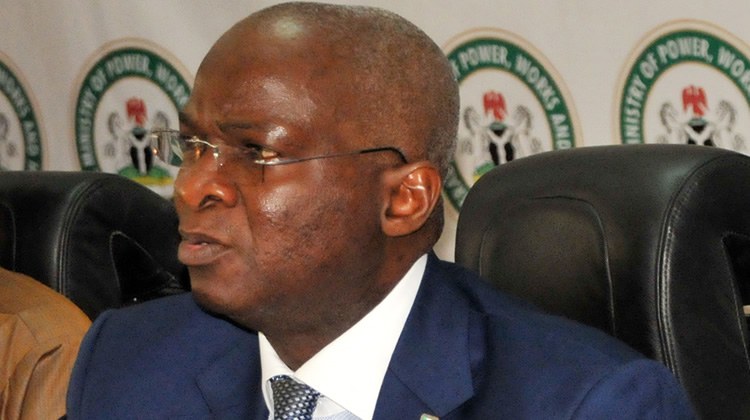 The Senate has described as, “fallacy of the highest order,” a statement credited to the Minister of Works and Housing, Mr. Babatunde Fashola (SAN), on the state of Nigerian roads.

Fashola, according to the red chamber, had alleged that the National Assembly members should be held responsible for the poor state of the federal roads in Benue State.

The upper chamber accused the Minister of trying to incite members of the public against the federal lawmakers by his allegation.

The Senate stated this in a statement by its spokesperson, Dr. Ajibola Basiru, titled, “Senate debunks Minister’s claim on budgetary allocations to road construction,” issued in Abuja on Sunday.

The red chamber said it took exception to the statement credited to Fashola, that the National Assembly should be held responsible for the dilapidated state of federal roads in Benue State, describing it as a “fallacy of the highest order.”

Basiru said the Minister was quoted to have made the allegation in his office in Abuja during a courtesy call on him by retired Generals and ‘other leaders of thought’ from Benue South Senatorial District led by Air Vice Marshal Morgan Monday.

The Benue elders were said to have visited Fashola who to complain about the deplorable state of roads in the senatorial district.

Basiru said the National Assembly could not, and should not be held responsible for the dilapidated state of roads whether in Benue State or in any part of the country.

The Senate said it would not want to engage in any unnecessary altercation with the Minister, but stated that it had to speak up because the issue of roads infrastructure was important and controversial.

The statement read in part, “It is necessary to put all the records straight so as to disabuse the minds of the unsuspecting public about the acts of the National Assembly.

“The records are needed to be set right so that the two arms of government should not be seen as working at cross purposes in the course of delivering dividends and good governance to electorate.

“Putting the records straight, the Senate gave the figures of the 2020 proposal for capital expenditure as N265, 868 037,093bn by the Executive which the National Assembly passed.

“The Executive later brought revised allocation of N256, 734,983,667bn which we also appropriated.

“The Senate, therefore, invites Nigerians and specifically the Ministers guests from Benue State South Senatorial District to note that “figures do not lie”.

Basiru said, “On the Minister’s allusion and or allegation to prioritising constituency projects over other projects, the Senate affirmed that the Minister was merely calling a pity party and being sentimental.

” The (Fashola’s) statement was made to set the National Assembly on collision course with the people they are democratically representing.

The Senate said that execution of the much talked about constituency projects lie within the Executive Arm of government through its various ministries, agencies and parastatals.