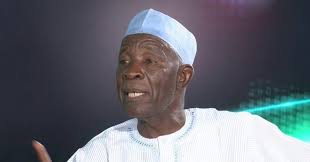 A member of the Board of Trustees of the All Progressives Congress and former ally of the President, Major General Muhammadu Buhari (retd.), Buba Galadima, has said  the #EndSARS protest removed the cloak of invincibility from the Buhari regime.

He said this in an interview with Sunday PUNCH in Abuja on Friday.

Galadima also berated northern governors over what he described as their “shameful” declaration that the youth-led protest, which was engineered by injustices meted out to them by the regime and its enablers, was an attempt to force a regime change.

According to him, unless those in government were playing the ostrich, the #EndSARS protest went beyond seeking an end to police brutality.

He stressed that Nigerian youths were demanding an end to the systemic corruption in public service and the exclusion of qualified Nigerians from access to existing opportunities.

Galadima said, “When #EndSARS started, they didn’t know that the sons and daughters of average Nigerians, who could not get food to eat, (could) make them lose sleep. And they’ve just seen a tip of the iceberg.

“They are leading this country into a revolution that they don’t want to accept. They are the people causing the revolution by excluding, disenfranchising people not on the basis of competence but on the basis of ‘they don’t belong’. That is why we need a leader that is a large-hearted Nigerian who will carry us all along, not because he is an Idoma man or a Bade man.

“Do they know? One of my friend’s sons wanted to join the Police Force. He was asked by these faceless people to pay an amount of money for him to be recruited. My friend told his son, ‘even if I had the money, I won’t pay, besides, I don’t even have the money. If you are recruited because I paid the money, you are also going in there to help yourself to make the money back.’”

He also accused some civil servants of taking vacancies to National Assembly members, making it difficult for anyone not connected to the NASS members to get the job.

He said, “Now, I have about seven children with master’s degrees. I have medical doctors, but none of them could be employed (into the public service) because I don’t have the money to give. Even my friends in the government are running away from me because they wouldn’t want to be seen with me, let alone for me to ask for a favour.

“A favour from a government formed by Buhari, whom I worked more than any human being, including Buhari himself, to bring into office, that I can’t bring even a son or a daughter to be employed?

“Or my daughter could work in the (Presidential) Villa for four years without salary? Not one penny. If they claim they don’t know they will read it in Sunday PUNCH now, let’s see whether they can pay her.”

Responding to allegations by northern governors that the #EndSARS protest was an attempt by some elements to force a regime change, Galadima explained that while the governors were entitled to their democratic rights to hold an opinion and share same, “it is shameful of them that when their kith and kin are being killed in Borno, Zamfara, Kano, Yobe, Adamawa, Katsina, Sokoto, Kaduna, Kano, Kebbi and Niger, they had no guts to come out or allow their people to protest, because the primary responsibility of every government is to protect the lives and property of citizens.

“In this respect, the government at all levels including the states in the north have failed. Youths who are victims (of police brutality) came out to protest. Is that wrong? And some people now come out to say they want to overthrow the government.”

He said the youth protest had made the regime “jittery’’ and that its “feeling of invincibility disappeared; they melted like oil on fire.”

Galadima, who is the former National Secretary of the defunct Congress for Progressives Change, further said, “For me, the governors should be ashamed of themselves. Why couldn’t they protest to the president, because he is one of their own? Why can’t they encourage their people?

“That is why they prefer to keep their people in ignorance and abject poverty so that they can continue to appeal to their sentiments. We also know that some clergy men were commissioned and paid humongous amounts of money to be preaching in mosques about this. Hunger, deprivation, poverty and disease do not know tribe or religion.”