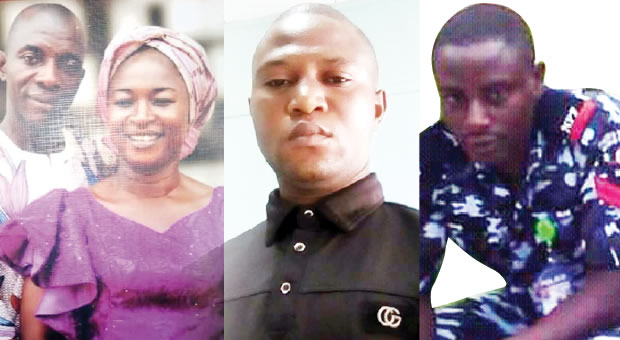 Wives of some of the policemen who lost their lives to the violence that followed the shooting of peaceful #EndSARS protesters by soldiers in Lekki, Lagos have narrated how their husbands and breadwinners were gruesomely murdered by rampaging hoodlums.

In emotion-laden interviews with Saturday PUNCH, they described their loss as heartbreaking, calling on police authorities to bring the perpetrators to justice and help the family members left behind by the slain cops.

The Inspector-General of Police, Mohammed Adamu, had revealed that 22 policemen were killed under extrajudicial circumstances by the hoodlums; some were left with varying degree of injury while 205 police stations and formations were destroyed.

In the violence that followed the shooting of the protesters, Amnesty International reported that no fewer than 12 protesters were killed at Lekki and Alausa areas of Lagos by security forces. The melee later spread to different parts of the country, during which public and private property were destroyed, especially in Lagos, several warehouses containing COVID-19 palliatives were looted and several private shops looted.

Abegunde’s widow, Sikirat, who is also a policewoman, and Oladele’s widow, Feranmi, who is a hairdresser, explained to one of our correspondents how their husbands died.

While the late Abegunde was said to have been smoked out of the station and beaten by hoodlums before he was set on fire, the late Oladele and another occupant, also a policeman, in a police vehicle were beaten and set ablaze close to the Iwo Road interchange.

Feranmi recalled that on Thursday, October 22, the day her husband died, she advised him not to go given the level of violence across the country, but that he said he needed to be at work and that since he worked at the Eleyele Police headquarters, he would be safe.

The widow, who put to bed about 16 days before the day of the incident, explained that she was later told her husband and others were sent on an assignment but in the process their patrol vehicle ran into a commercial motorcyclist.

She said when the atmosphere became tensed, the two policemen tried to escape but were chased to Iwo Road by the hoodlums who beat them and set them ablaze.

She added, “I heard on the radio around 11am that two policemen were killed at Iwo Road. Even though my neighbours and me were worried that policemen were being attacked, I didn’t think my husband could be among because he was largely an administrative person and wasn’t in the patrol team. He joined the police in 2012 and since he was transferred from Ekiti State to Ibadan, he never worked at police checkpoint.

“The okada rider didn’t die and being a gentle person, we heard they pleaded with the mob that it was a mistake, but the hoodlums didn’t budge. If he was a violent person, he would have attempted to resist the mob attack maybe by shooting in the air, but they were killed.”

She said she became worried when he didn’t come home on time but that after much persuasion by family members, the news was relayed to her.

She added, “By 8pm, the barracks was already deserted. I was alone with the children. I called but I couldn’t reach him. Around 9pm, I was so worried, so I called my sister-in-law and asked her to help me check him at the office. Later, they told me he had an accident and only broke a limb. I was frightened the more.

“To cut the long story short, my family members came around on Friday morning and broke the news to me. I cried and cried. My husband was killed by angry mob 16 days after the christening of our baby. I was told my husband was burnt alive. Some neighbours told me they heard about it earlier but no one could break the news to me.”

She said her husband was everything to her and that they loved each other.

“He was my angel and a nice person to people around him,” she said. “If he had N1,000 on him and I needed money, he would be ready to part with N990. The entire barracks is grieving over his death.

“I want the government to assist our children, even if it’s scholarship so their education doesn’t suffer. I had just finished training as a hairdresser but now there is no money to set up a salon. Government should help us.”

Meanwhile, Sikirat said she had yet to ascertain the whereabouts of her husband, whether dead or alive, since he left the house on Tuesday, October 20.

She said he left for work early as his Divisional Police Officer told him to report for work so they could monitor a peaceful protest in front of his station at Ojoo. She said he later called that hoodlums had burnt down their other outpost and he told him to be careful.

“After 1pm, he called that I should pick the children from the school. Before 2pm, I called to tell him that I had picked the children and we were going home. Until now, I have been calling his line but it’s not reachable. I called his colleagues but the numbers were also not available.

“The next day, I went to their station and saw that it had been burnt down. I wondered what was going on. I didn’t have the number of the DPO, so I went to Eleyele, police headquarters, to report that I could not find my husband. They said they would get back to me.

“There I saw a burnt corpse but I didn’t know whether it was a human being or an animal. On Thursday, I asked my neighbour to accompany me to the headquarters. I met the Police Public Relations Officer who asked me to drop my phone number that they would contact me. But I heard the area boys saying ‘we burnt two policemen; some were wounded and some were killed.’”

She said she and her children were still hopeful that Inspector Abegunde would return home. She added, “We went to the hospitals at Ojoo and Agbowo but the doctors said they didn’t have victims there. We also went to Adeoyo State Hospital, but they said no corpse was brought there.

“On Friday, I got a message that read ‘I am not too sure if your husband was among the two people that were burnt in front of the station.’ I have been parading the headquarters to ask for the whereabouts of my husband.”

In Abia State, wives of slain policemen have also cried out to the Federal Government to come to their assistance following the killing of their husbands by hoodlums.

On Monday, October 19, a policeman was reportedly killed, while the following day, Inspectors Oliver Igbani and Frank Okoye were murdered in Aba.

‘It’d be better if they left corpse for us’

Meanwhile, the wife of late Igbani, Sergeant Eyo, told one of our correspondents that life had been unbearable for her, especially with four children to cater for.

Eyo, who wept profusely during an interview with Saturday PUNCH, said the incident left her confused, stressing that it’s too early for her to be a widow. The woman, who hails from Otuokpoti in the Ogbia Local Government Area of Bayelsa State, described the way her husband was killed as worrisome.

A source, on Tuesday, October 20, said the husband was on duty at a bank in Aba and in mufti when the hoodlums who had hijacked the #EndSARS protest attacked the bank.

“He was beaten to death. His head and legs were cut off and his thorax was burnt and only a part of his body was recovered,” the source said.

Eyo described her husband’s death as a “challenge of life” and prayed God to give her and her children the strength to cope with the loss.

“If after killing my husband, they left the body for us, it would have been better,” she added.

She said she and her children had been at the mercy of neighbours, while urging government to assist her family.

‘I don’t know how my husband was killed’

Also lamenting, Okoye’s widow, Mrs Theresa Frank Okoye, a housewife said she was still confused on how her husband was actually killed because different stories had emerged.

“All I’m sure of is that he was killed,” said Theresa as she lamented that things had been difficult for her and the children.

The late Okoye, who hailed from Effium in the Ohaukwu Local Government Area of Ebonyi State, left behind two boys and three girls, whom according to the wife, had been asking about their father.

She added, “We pray God to grant him peaceful rest and we plead with government at all levels, especially the Federal Government, to come to our rescue. I don’t want the education of my children to be truncated.”

She said the news of her husband’s death made her mother-in-law to fall ill.

The wife of the third slain policeman could not be reached and the officer has since been buried, a source in Osisioma Police Division hinted.

In Lagos State, facts have also emerged on how late Inspector Ade Aderibigbe, attached to Meiran Police Division, was killed.

A police officer, who spoke on condition of anonymity, said Aderibigbe was on a mission to rescue a colleague, who was said to have been shot, when he was caught in a crossfire with some hoodlums.

The source said, “Inspector Ade was on his way to rescue a colleague who works with the Patrol and Guide department when he was shot. It is sad because his wife is also a police officer. Both husband and wife were serving the country diligently. Unfortunately, see how the man ended.”

Our correspondent learnt that the late police officer buried his father about two months ago, while his first daughter just had a baby about two weeks ago.

The late officer, who was buried about a week ago, is survived by an aged mother.

“His death was tragic. He was burnt beyond recognition after he was shot. It was a gory sight, seeing his remains being packaged into the coffin,” the source added.

In Ogun State, Chidebere, the 22-year-old son of a slain policeman, Augustine Egholenwa, said his father, whom he described as the breadwinner of the family, would not have been killed if the government had handled the protest in a better way.

The deceased, murdered by hoodlums in Atan, Sango-Ota, was the Division Crime Officer in Atan Divisional Police Station before he was killed on October 21, the day violence broke out in different states after the Lekki shootings on October 20.

He added, “Due to his work schedule, he used to come home on weekends and he sent money to us, being the only parent we had. He was everything to me. His death is very painful.

“I strongly feel if the government had managed the protest at the early stage, it wouldn’t have turned out like this. Now, we are the victims. To the hoodlums going around causing trouble, look at me now, I have no father anymore.

“How can you go to the police station to kill a policeman, leaving their children fatherless? The brutality against the police should stop; they are fathers and mothers to people. I’m speechless.”

He also called on the government to assist the family.