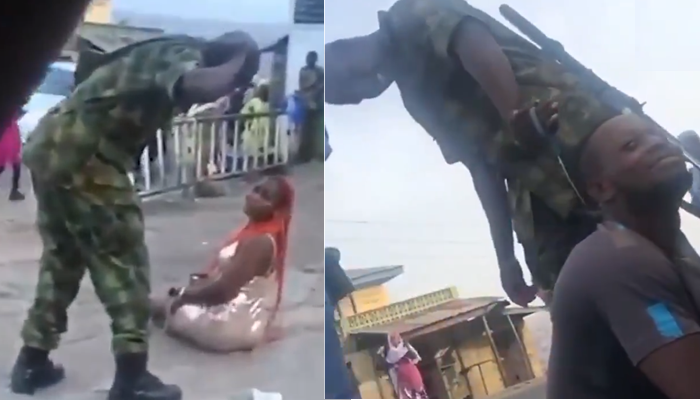 The Oyo State Commissioner for Youth and Sports Development, Seun Fakorede, says the Nigerian Army has arrested soldiers who flogged a woman for ‘indecent dressing’ and shaved youths for ‘wearing improper hairstyles’.

He made this known in a series of tweets on Monday.

The PUNCH reports that the soldiers were caught on camera unleashing punishment on the civilians.

Fakorede assured Oyo residents to go about their daily business and activities without fear.

He tweeted, “My ears are full of news of the unlawful activities of some soldiers of the Nigerian Army, over the weekend.

“I have immediately reached out to the Commandant of the Operation Burst and I’ve been assured that the men involved in this distasteful operation have been arrested and taken to the barracks — they will be dealt with accordingly. This will not repeat itself again in Oyo State.

“Please, kindly go about your daily business and activities without fear. Thank you.”

It was learnt that the soldiers were deployed in the streets of Beere in Ibadan, Oyo State, to curb the #EndSARS protests.

Some of the soldiers, who were chanting ‘End SARS’ in a video that has since gone viral, made a young lady wearing a nude camisole and orange attachment to sit on the bare floor at a filling station while one of them whips her buttocks.

Also, a young man, whose head was also shaved, narrated that “They said I should take off my cap and when I did so, they flogged me and asked me to kneel down. When I asked what my crime was, he ordered me to sit down and then brought out a pair of scissors from his pocket.

“The funny thing was that they collected money from us for the haircut.”