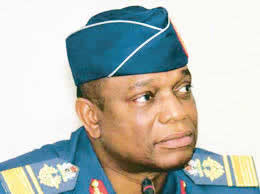 THE former Chief of Defence Staff, Air Marshal Oluseyi Petinrin (retd), has expressed optimism that various reforms initiated by the Federal Government and the National Assembly would address security challenges facing the country.

Petirin spoke in Ipetu Ijesa, Osun State on Saturday during the Aropeju Day shortly after he was honoured with a chieftaincy title of Are Jagunmolu.

He said the Federal Government had been making effort to ensure that the country was more secure by addressing obvious shortcomings that had negatively affected security of lives and property.

“There are several things this administration is doing regarding our security challenge. For instance, the police reform and other bills presently before the National Assembly aimed at addressing specifically, security challenges is a commendable step,”Petinrin said.

In his remarks, Ajalaye of Ipetu Ijesa, Oba Samson Agunbiade Oke, commended the Federal Government for given the town some transformers and called on the residents to respect COVID-19 protocols, as the pandemic had not been totally defeated.