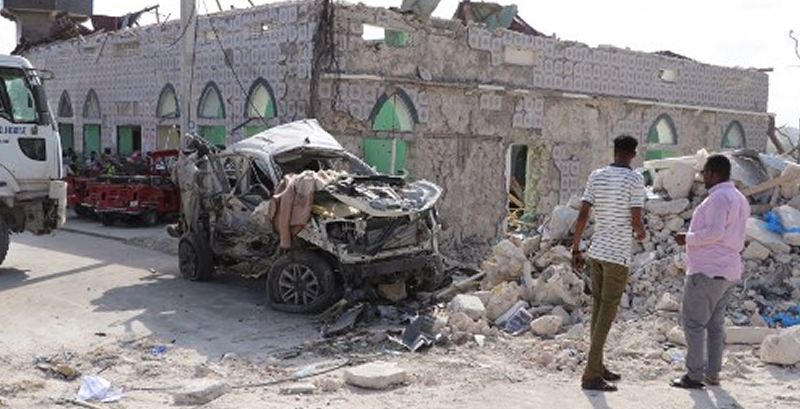 An hours-long attack on an Afghan police special forces base involving car bombs and an intense firefight killed five policemen and wounded dozens of people, officials said Tuesday, as violence continued to surge in the war-weary country.

Three suicide bombers detonated their explosives-loaded vehicles targeting the base in the city of Khost near the Pakistan border, Khost police chief Ghulam Daud Tarakhil told AFP, before other gunmen tried to storm the compound.

One suicide bomber detonated his vehicle at the gates of the base early in the morning, while two others blew up their vehicles later during the gun battle between security forces and gunmen, he said.

A fierce firefight that lasted for almost nine hours between the militants and security forces ended with the killing of seven other militants, Tarakhil said.

No group has so far claimed responsibility for the attack.

Further north, three civilians were killed and 10 others were wounded in a separate attack Tuesday when a “sticky bomb” attached to a car exploded near Kabul airport, police spokesman Ferdaws Faramuz said in a statement.

Violence has raged across Afghanistan in recent weeks even as the Taliban and Afghan government remain engaged in peace talks to end the country’s long-running conflict.

Afghan and US officials have repeatedly warned that the rising bloodshed is threatening the talks being held in Qatar since last month.

The United Nations Assistance Mission in Afghanistan said in a report released on Tuesday that the number of civilians killed and wounded has failed to slow since the start of peace talks on September 12.

“The peace talks will need some time to help deliver peace,” UNAMA chief Deborah Lyons said in the report.

“But all parties can immediately prioritise discussions and take urgent, and frankly overdue, additional steps to stem the terrible harm to civilians.”

UNAMA, however, said that the overall civilian casualty figure had dropped by around 30 per cent in the first nine months of 2020 compared to the corresponding period last year.

The first nine months of this year saw 2,177 civilians killed and 3,822 wounded, the report said.

The majority of the civilian casualties, about 58 per cent, were caused by “anti-government elements” including the Taliban and Islamic State group, it said.

Afghan security forces were responsible for 23 per cent of all civilian casualties, many killed in airstrikes and ground engagements.