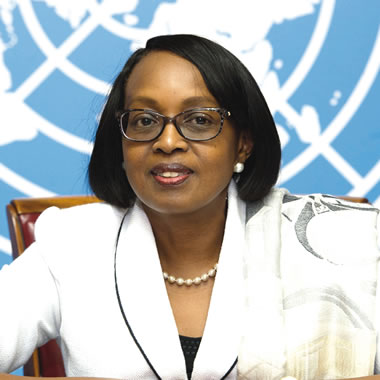 THE World Health Organisation said on Thursday that one of its offices in Nigeria was looted, adding that pieces of Personal Protective Equipment were stolen from the stores.

The African Regional Director, WHO, Dr Matshidiso Moeti, said this while responding to a question from The PUNCH during a webinar attended by select African journalists on Thursday.

Responding to a question on what effects the protests, riots and looting in the last couple of weeks would have on the fight against COVID-19 in Nigeria, Moeti said mass gatherings remained a breeding ground for COVID-19

“As I said, we were concerned not just by the situation in Nigeria, which is very sad by the way, and we know that in the process, the WHO office in one part of Nigeria was actually looted and so were some stores of PPEs. It is a very sad situation.”

In another development, the Managing Director of Cross River Basin Development Authority, Bassey Nkposong, revealed that hoodlums demanded N15m in order to spare the Basin Authority from destruction.

He disclosed this to journalists on Thursday at scenes of the pillaged agency, saying over 30 vehicles in the agency and all the offices were either vandalised or burnt during the violence that trailed the #EndSARS protest last weekend.

“They called one of my staff and asked for N15m to spare the place. We negotiated the amount to N5m. My staff members were already contributing money. But they could not wait. They proceeded to attack the premises,” he disclosed.

Nkposong added that 1,690 birds, chemicals, feeds, machines worth over N8m were looted from its poultry in Calabar.

In Delta, the state caucus in the House of Representatives led by the Minority Leader, Mr Ndudi Elumelu, donated N150m to the state government for the rehabilitation of a court burnt during #EndSARS protests.

Elumelu announced the donation of when they paid a solidarity visit to Governor Ifeanyi Okowa on Wednesday in Asaba.

He said, “The donation is part of our support in rebuilding the burnt High Court in Asaba. We, the lawmakers, came on a solidarity visit to Governor Okowa to empathise with him and the people of the state over the destruction of public buildings by hoodlums during the #ENDSARS protests”.

In his remark, Okowa reaffirmed his administration’s readiness to partner youths in the state to improve governance and its structures.

The command through its spokesperson in Calabar, Irene Ugbo, was said to have claimed in a statement that the hoodlums were conveyed by boats to commit the crime in the state (Cross River).

But reacting to the allegation on Thursday in Uyo, Ememobong said the government’s position on the matter was arrived at after a review of the evidence by security agents in the state

He described the PPRO’s claim as a careless statement, which could cause or create disaffection between the two sister states.

Violence may set Nigeria back by decades, say Ekiti elders

The Ekiti Council of Elders has lamented the loss of lives and destruction of property during the violence that rocked the country following the hijack of the #EndSARS protests by suspected hoodlums.

The council said, “It is very unfortunate that at a time that all hands should have been on deck in recuperating from the COVID-19 pandemic that grounded the nation for the past months, we have to face the consequences of massive loss of lives and destruction of public and private properties which might set us back by decades.”

In the statement signed by the council’s President, Prof. Joseph Oluwasanmi; Secretary, Niyi Ajibulu; and Public Relations Officer, Dr Bayo Orire, the elders stressed “the importance of engaging the youth and assisting them to understand global and local challenges.”

Looting of warehouses caused by protests, not poverty – Adesina

The Special Adviser to the President on Media and Publicity, Femi Adesina, said on Thursday that the looting of warehouses and shops by hoodlums was not necessarily caused by poverty but by the pandemonium that accompanied the #EndSARS protests.

Speaking on Sunrise Daily, a programme of Channels Television, Adesina said attributing the looting to poverty was like justifying armed robbery.

Adesina claimed the protracted protests provided an atmosphere for looting to take place, arguing that if police stations were not burnt down, there wouldn’t have been a breakdown of law and order. The President’s spokesman said, “Criminality will always be criminality and mere anarchy promotes criminality. What has happened in the last two or three weeks led to what has happened now. If there was cohesion and tranquillity in the society, this wouldn’t happen.

“I don’t agree that it is all about poverty. Yes, in any country, you will have people who are poor, who are hungry and that is one of the reasons why you have a government to ensure that the number of poor and hungry people is reduced.”

When challenged with the fact that Nigeria had become the poverty capital of the world, the President’s spokesman said the high level of poverty was caused by 60 years of mismanagement of public funds, which could not easily be addressed in two years.

Responding to the report of Amnesty International on the Lekki shootings, Adesina rejected the statement by the group.

He said Amnesty could not have more facts about the country than the Presidency, which had a ‘helicopter view’ of things happening in the country.

He maintained that the looting and rioting were not caused by the military shootings because there was already violence before the Lekki incident.

“So, you cannot say it was Lekki that precipitated all those things. Look at the timelines, look at when all those things (happened). You will discover that it happened before Lekki. So, you are falling for the gambit of Amnesty International.

“Amnesty International does not have all the facts, they don’t run this country; they shouldn’t know beyond what they have been told. They shouldn’t know more than you and I should know as media people as watchers of developments.”

Also, the police in Niger State have charged 17 suspected persons who planned to incite youths into unwarranted protest in the state to court.

It was learnt that the suspects were not from the state, but were hiding under the guise of #EndSARS protests in the country to lead protest that could cause the destruction of lives and property.

The Police Public Relations Officer in the state, Wasiu Abiodun, confirmed the development and said been charged to court.

Abiodun said we cannot allow hoodlums to take over the state known for peace, urging parents and all relevant critical stakeholders to continue to prevail on their wards to remain peaceful and shun any act that would jeopardise the peace of the state.

He admonished the youth to shun any act of lawlessness, adding that the command was prepared to provide adequate security and peaceful coexistence in the state.

In related development, the Niger State Government has announced the banning of all forms of protests across the state.

The Secretary to the State Government, Ibrahim Matane, has also banned all forms of rallies and gatherings on the streets that would lead to the blocking of roads in the state.

Matane revealed that the decision to ban protests was as a result of the security situation in the country occasioned by #EndSARS protests.