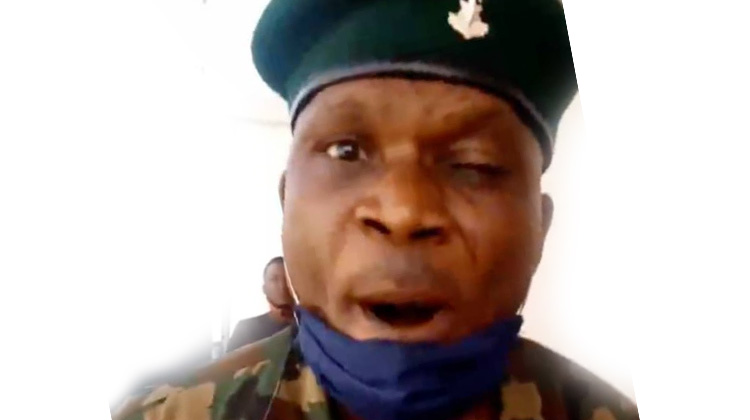 The 9 Brigade of the Nigerian Army has arrested a Corporal, Omoh F, who was caught on video flogging a woman at an Oshodi branch of the United Bank of Africa in Lagos.

The Spokesman for the 9 Brigade, Major Olaniyi Osoba, confirmed this to The PUNCH on Monday.

“I can confirm to you that he has been detained and investigations are ongoing,” Osoba said.

Earlier, a lady tweeted on Monday how she was flogged with a belt by the corporal.

Tweeting with her handle, @vels20, she alleged that the soldier had tried to jump an ATM queue but she challenged him.

She further stated that this angered Corporal Omoh who removed his belt from his waist and flogged her.

She tweeted, “I was just assaulted by an army official this morning 26/10/2020 at the ATM stand of UBA at their Oshodi branch. I am still shaking and crying as I write this because I have never felt this way in my entire life. I’m also scared writing this because he threatened me.

“He flared up as you will see in the video below, and before I knew what happened he brought out his belt and hit me.

“This happened at UBA branch in Oshodi and the security men were there. I literally cried my way to the office. I never insulted him. He threatened to make me bleed in my own country because I asked if he was in the queue. I want justice.”

In the video, customers are seen pleading with the soldier who refused to be pacified as he takes off his belt from his waist to flog the lady.

The victim, who wished to remain anonymous, told The PUNCH that she was still feeling pains.

“I am still in pain right now,” she said, adding that she was considering taking legal action against the army.

The video, which had been shared thousands of times on several social media platforms, was widely condemned by Nigerians.

Amnesty International, as well as several rights groups, have accused the Nigerian Army of human rights violations some of which include torture, subjecting civilians to corporal punishment or outright extrajudicial killings.