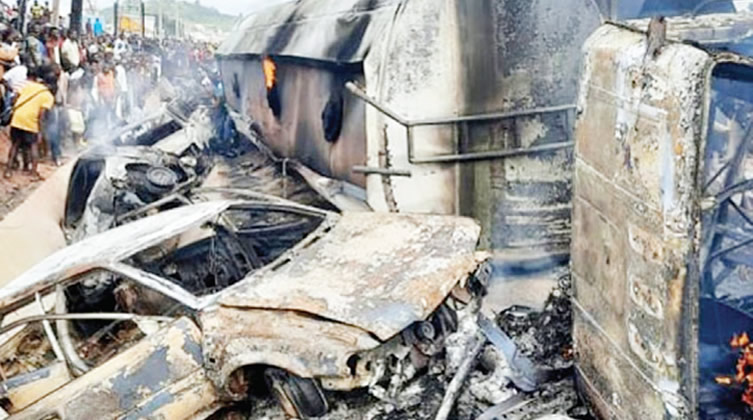 Three persons lost their lives on Saturday in a petrol tanker explosion and road crash in Ogun and Osun states.

While a tanker driver and his motor boy died in an overnight explosion on Kara Bridge in Ogun, along Lagos-Ibadan Expressway, a motorist was killed along Osogbo/Ikirun Road in Osun.

Our correspondents gathered that the 45,000-litre tanker reportedly fell on its side and spill its contents which later sparked off the fire.

Sunday PUNCH learnt that 35 vehicles, including those in a car mart close to the spot, were burnt in the explosion which occurred around 1am and raged for hours, before it was put out by a combined team of Lagos State Fire Service and its Ogun State counterpart, the Lagos State Emergency Management Agency, Federal Road Safety Corps and Traffic Compliance and Enforcement Corps.

The incident resulted in a gridlock that stretched inwards Lagos, trapping a number of motorists.

Hoodlums initially denied the emergency responders access to the scene but with reinforcement by security agents, the fire was eventually put out and the debris evacuated around noon.

The spokesperson for TRACE, Babatunde Akinbiyi, said, “The driver and the motor boy died in the ensuing inferno that engulfed the scene with about 35 vehicles parked along the traffic corridor burnt down.”

In the Osun road crash, one person was confirmed dead while five others were injured.

The accident occurred around Steel Rolling Mill, along Osogbo/Ikirun Road on Saturday.

It was gathered that the vehicle involved in the lone accident was heading towards Osogbo when it lost control and crashed, causing the death of the yet-to-be-identified person.

She said the accident occurred around 3:45pm and blamed it on excessive speeding.

Ogunyemi said, “Victims of the accident had been taken to a private hospital in Osogbo, while the remains of the deceased had been deposited at the morgue of Ladoke Akintola University of Technology Teaching Hospital, Osogbo.”