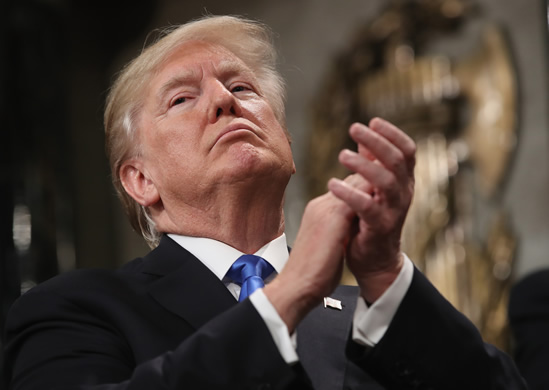 Trump, via his Twitter handle, @realDonaldTrump, stated that the US saluted the courage of the soldiers for the operation.

He tweeted, “Last night, our country’s brave warriors rescued an American hostage in Nigeria. Our nation salutes the courageous soldiers behind the daring nighttime rescue operation and celebrates the safe return of yet another American citizen.”

Similarly, the US Secretary of State, Mike Pompeo, in a statement titled, ‘US Rescues American Held Hostage in Nigeria,’ noted that the US was committed to the safe return of the country’s citizens taken captive.

It added, “We delivered on that commitment late last night in Nigeria, where some of our bravest and most skilled warriors rescued a US citizen after a group of armed men took him hostage across the border in Niger.

“Thanks to the extraordinary courage and capabilities of our military, the support of our intelligence professionals, and our diplomatic efforts, the hostage will be reunited with his family. We will never abandon any American taken hostage.’’

The Washington Post reported that the American citizen was kidnapped on Tuesday in Masalata region, Niger, and the Pentagon said US Navy SEAL Team Six led the overnight operation in northern Nigeria, where fighters loyal to al-Qaeda and the Islamic State had bases. It noted that none of the service members was injured in the raid.

The newspaper quoting a US official who was not authorised to speak on the matter said the assailants forced Watson from his farm in remote Masalata on Tuesday, demanding more than $1m from his family, who are missionaries, and threatened to sell him to extremists.

According to The Guardian (US), in a statement issued as the President campaigned in Pennsylvania on Saturday afternoon, he said, “Last night, at my direction, the United States military conducted a successful operation to rescue an American hostage in Nigeria, kidnapped just 96 hours earlier. United States Special Forces executed a daring nighttime operation to rescue their fellow American with exceptional skill, precision and bravery … The former hostage is currently in good health and has been reunited with his family.’’

It was reported that Walton reared camels, sheep and poultry and grew mangoes near the border with Nigeria. He was said to have been abducted by six men armed with assault rifles on motorcycles who forcibly took him away.

His abductors reportedly left his wife, young daughter and brother behind.

Despite support from French and US forces, Niger, like most countries in the Sahel region, grapples with disorder as groups with links to al-Qaeda and the Islamic State battle the army and civilians.