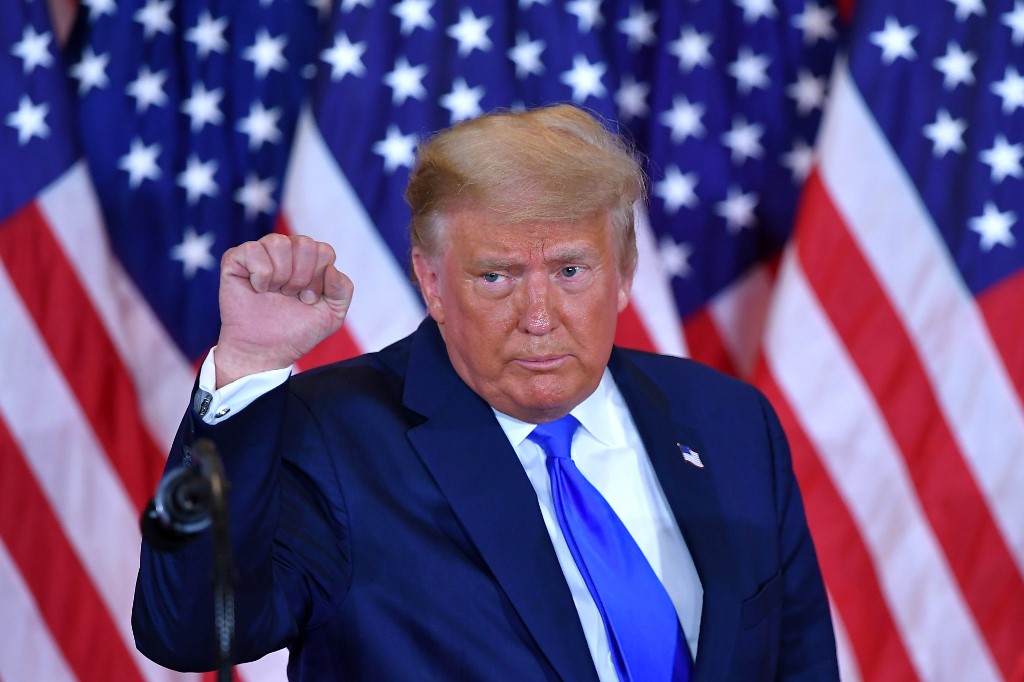 President Donald Trump is expected to start a legal battle on Monday (today).

He had, after Democratic candidate, Joe Biden, on Saturday won the United States presidential election, rejected the result, saying he was going to court.

Biden had addressed a deeply divided nation on Saturday night, promising to unite the country.

He also asked the supporters of President Donald Trump to give him a chance, calling on all Americans to turn the page from what he described as a “grim era of demonisation.”

Biden made the plea for unity and understanding in his home town of Wilmington, Delaware.

He pledged to govern by the creed that “ he does not see blue states and red states, but only the United States.”

But Trump had said, “The simple fact is this election is far from over. Beginning Monday, our campaign will start prosecuting our case in court to ensure election laws are fully upheld and the rightful winner is seated. So what is Biden hiding? I will not rest until the American People have the honest vote count they deserve and that Democracy demands.”

Trump showed no indication that he plans to concede to his rival and continued to push the natrative on Twitter that he had won the election.

He was said to be pushing his attorneys to pursue legal challenges that would delay formal certification of the results.

It was gathered on Sunday that there been no change in Trump’s plan to approach court although the CNN reported that, Jared Kushner, Trump’s son-in-law and senior adviser, had approached the President about conceding the election.

Biden-Harris deputy campaign manager, Kate Bedingfield, said there had been no communication between Biden and Trump, or between any representatives from either campaign, since the race was called.

Biden campaign senior adviser Symone Sanders, also told CNN’s Jake Tapper on ‘State of The Union’ Sunday that “a number of Republicans from the Hill have reached out but I don’t believe anyone from the White House has.”

Martin also referenced Biden’s Irish-American heritage, adding, “Joe Biden has been a true friend of this nation throughout his life and I look forward to working with him in the years ahead. I also look forward to welcoming him back home when the circumstances allow!”

The leaders of US allies South Korea and Australia also congratulated Biden and Harris.

Australian Prime Minister, Scott Morrison, said in a statement that “the President-elect has been a great friend of Australia over many years,” and noted that Biden would step into the role at a crucial time as the world battles the COVID-19 pandemic.

“American leadership is indispensable to meeting these challenges and upholding the rules, norms and standards of our international community,” Morrison said.

Orbán said in a letter to Biden, “I wish you good health and continuous successes in fulfilling your duties of extraordinary responsibility.”

Netanyahu said he and Biden have had a “long & warm” personal relationship for almost 40 years and sees him as “a great friend of Israel” and looks forward to working together.

In a separate Twitter post, Netanyahu thanked Trump “for the friendship you have shown the state of Israel and me personally, for recognizing Jerusalem and the Golan, for standing up to Iran, for the historic peace accords and for bringing the American-Israeli alliance to unprecedented heights.”

Former US president George W. Bush also offered his “warm congratulations” to President-elect Joe Biden, calling the Democrat “a good man, who has won his opportunity to lead and unify our country.”

The two-term Republican, in a statement issued by his presidential center in Dallas, also congratulated loser Donald Trump for his “extraordinary political achievement” in winning 70 million votes.

However, two Republican senators have so far congratulated the president-elect.

They are former presidential candidate Mitt Romney, and Lisa Murkowski of Alaska.

Murkowski said honouring Americans’ choice “in who leads us has always defined us and is the source of our exceptionalism. We must uphold that legacy.”

Speaking to NBC’s Meet the Press, Romney referred to Biden as “president-elect,” something other Republicans have avoided.

But he said he was not even going to try to talk Trump down from his insistence that he won the election.